European Group of Pensioners from Savings Banks and Financial Institutions

Dates: from 28th April until 5th of May 2019
Airport: VIENNA (Expected transfers airport-hotel and hotel-airport)


Vienna has something that makes it addictive; it is old and modern at the same time. Its mixture of cultures generates a great variety of dishes from all the cuisines of the world. Vienna is music and culture, cradle of great composers like Strauss, Beethoven or Mozart and home of the famous opera. Vienna is a city with a special charm that will be the setting for our next special Euromeeting, since this edition will be the 25th which is as special as that of our XXV anniversary of Euro-encounters.

The Hotel NH DANUBE CITY 4 ****, is the chosen place for offering an ideal location for business and leisure travelers. In addition to being within walking distance of the UN building and the Vienna International Center, the hotel provides access to recreational activities on the Danube Island. "Donau Zentrum", the largest shopping center in Vienna, is within walking distance of the hotel. Its good communications with the airport and the city center (the Kaisermülen VIC Metro station is about 500 meters from the hotel), make this hotel the ideal place to combine rest and leisure and to visit the city to your liking.

PREVIEW OF THE GENERAL PROGRAM

From SUNDAY, April 28th to SUNDAY, May 5th, the following excursions have been scheduled:

We will start our Euromeeting with a guided tour through the historical center of Vienna (UNESCO Heritage) visiting the interior of Saint Stephen’s Cathedral, true symbol of the city. We will walk the medieval streets of the surroundings, the Jewish quarter; we will pass through the "Graben", (in German, ditch, pit); one of the most important streets of the "Innere Stadt", the center of the city of Vienna. We will pass through the Plague Column and through the "Kohlmarkt", one of the best shopping streets, and the famous Demel Pastry Shop. The Heroes' Square and the outer grounds of the Imperial Palace "Hofburg", which was the residence of the Habsburgs for six centuries until 1918 will also be visited. The guides will entertain the excursion by telling anecdotes and lesserknown stories of the royal family and of the most famous historical figures. 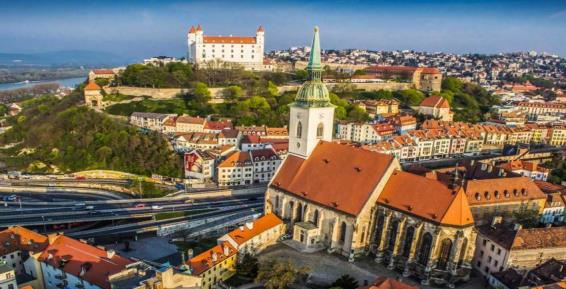 This day full-day excursion will be dedicated to the wonderful city of Bratislava, the capital of Slovakia with some 450,000 inhabitants. In recent years it has become an attractive and modern city in which the historic center has been carefully restored.

Upon our arrival, our local guides will be waiting for us by language to go to the castle in order to enjoy a great panoramic view. The rest of the visit will be done on foot, passing through the historic center, the Cathedral, the Archbishop's Palace, the House of the Good Shepherd, the Presidential Palace, the San Miguel Gate, Palffy Palace, the old university, among other monuments. After discovering its intricacies and letting ourselves be carried away by its charms, we will return to the hotel.

We will start the day heading towards the monumental Ringstrasse, with the old Ministry of War, in front of which you can see the statue of Marshal Radetzky. After that we will pass by the Museum of Applied Arts and the "Stadtpark", one of the oldest and most famous parks of the city to finally reach the opera. Then we will go to the Imperial Palace "Hofburg", the Heroes Square, Maria Theresia Square with the Museums of Fine Arts and Natural Sciences, the Parliament, the National Theater, the Town Hall, the University and the Votive Church.

Next, we will go to the Prater where we can contemplate the famous Giant Ferris Wheel, until we reach the "Karlsplatz" (Charles Square), with the Musikverein (the most important auditorium in the city), the Church of Saint Charles, the Secession and the pavilions of Otto Wagner, whose houses we will also see in the Wienzeile, after passing by the famous Naschmarkt market. We will visit the Schönbrunn Palace, the summer residence of the Habsburgs. The palace was conceived by Johann Bernhard Fischer von Erlach as a replica of Versailles and was built between 1695 and 1711. The Empress Maria Theresia had it remodeled in the years 1744 to 1749, the Works were carried out by Nikolaus Pacassi.

In this full day excursion we will go to Melk to visit the Benedictine Abbey. The Melk Abbey is the most important Baroque monument located on the banks of the Danube. Since the name "Ostarrichi (Österreich or AUSTRIA) was first mentioned in the year 996, Melk witnessed its history, cultural and spiritual center. It also houses a school with almost 900 students. The Melk Benedictines also protect 23 parishes in the region. Later we will embark on Melk where we will eat while we take a boat trip to Dürstein. In this medieval town, according to a legend, Richard the Lionheart was held prisoner on his return from the Crusades. It is a small town full of charm in which we will enjoy a great guided tour. The Wachau region (UNESCO World Heritage), and the Danube valley offer magnificent landscapes with unforgettable views of vineyards, medieval castles and picturesque villages. Then, after a magnificent day surrounded by nature, we will return to the hotel.

We will start this afternoon excursion, heading to the Prater, the amusement park, where we will be carried away by the charm of Vienna, thanks to its giant ferris wheel. Towards eight in the afternoon, we will go dinner to a typical Viennese tavern, the "Bach Hengl" to immerse ourselves in a relaxed atmosphere with good music and traditional dinner. These establishments, far from being thought of as tourist attractions, are traditional places that are part of the social life of the Austrians. Here people not only meet to spend time with friends but also to celebrate weddings, baptisms or business events. Afterwards, we will go to the hotel.

On this day we will go to the Vienna Woods, where we will visit some of the most beautiful areas around Vienna, in the "Wienerwald". During this trip, in addition to the landscapes with their lush forests and extensive vineyards, will visit "Mayerling", which was the hunting lodge and the place where the tragedy of the death of the heir to the throne, Rodolf and his mistress , the vase Vetsera, and which, on the initiative of Franz Josef, became a carmelite convent.

Next, we will go to "Heiligenkreuz", a Cistercian monastery from the 11th century with a beautiful romantic, Gothic and Baroque architecture that houses the tombs of the last Babenberg. We will finish our excursion with a guided tour of the spa town of Baden to later return to the hotel.

(The preview of the excursion program may have some slight modification)

In the afternoons, the days of the half-day excursions (Monday 29 April, Wednesday 1 and Friday 3 May) the following meetings will take place: